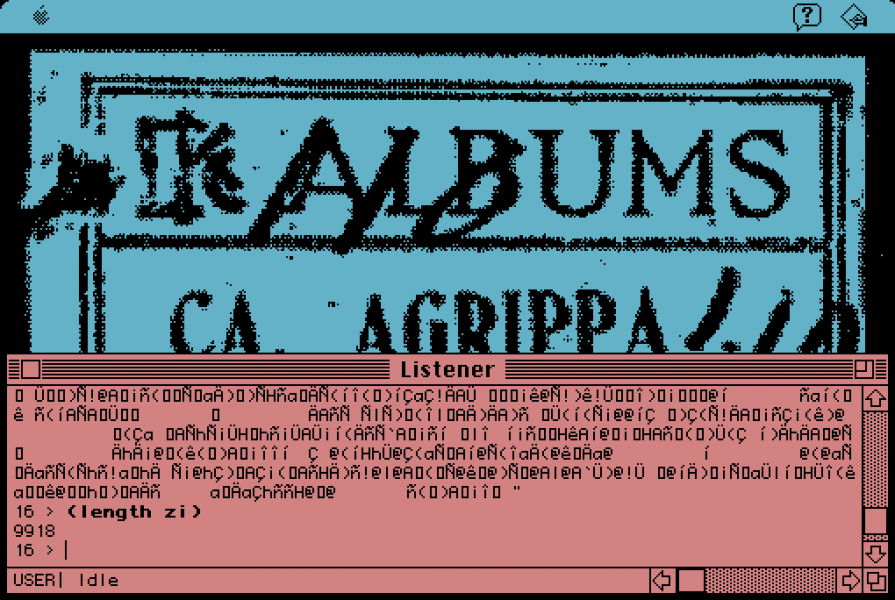 In 1992, cyberpunk author William Gibson published a 300-line poem on a 3.5″ floppy disk, titled Agrippa (A Book of the Dead). The poem was stored as a Macintosh program that, when run, would display the poem and then irreversibly encrypt itself, destroying the stored poem.

In 2012, I became interested in unlocking the encryption of Agrippa through the Agrippa Challenge, which enlisted the Internet to figure out the program. Here’s what I figured out.

The Agrippa program was developed in Macintosh Common Lisp, a dialect of Lisp augmented with routines to interface with the classic Macintosh OS of that era. Only the compiled binary was provided, and the source code has been lost to time.

On The Agrippa Files, a site dedicated to collecting information and resources related to Agrippa, there is an earlier draft version of the program’s source code:

The encryption algorithm there is a very straightforward in-house “encryption” algorithm that encodes data in 3-byte blocks. The design is clearly ad-hoc, and it does not reflect any known public cryptosystem; in particular, the reference to DES has nothing to do with the actual DES cryptosystem (the un-make-des function more closely resembles the RSA algorithm). This algorithm encodes data in 3-byte blocks. First, the 8 bits in each byte are permuted through a 8-position permutation (do-it), then the bits are split into two 12-bit integers (by taking the low 4 bits of the second byte and the 8 bits of the first byte as the first 12-bit integer, and the 8 bits of the third byte and the 4 high bits of the second integer as the second 12-bit integer). Each is individually encrypted by taking them to the 3491th power, mod 4097; the bits are then reassembled into 3 bytes.

Side note: 3491 appears nowhere in the code, but it is the exponent which reverses the action of taking the 11th power, mod 4097 (the implementation of un-make-des); that is, taking a number to the 3491th power mod 4097, then to the 11th power, again mod 4097, will result in the original number (mod 4097) for most integers. (This doesn’t work for numbers divisible by 17 or 241; evidently, the developer never ran into such values when using his encryption system as they would otherwise corrupt the text).

The 8 bits of the middle byte are permuted through a different 8-position permutation (do-too-it) and the three bytes are output as encoded bytes. The big block of data is the whole poem encoded with this algorithm and printed as MacRoman characters (with escapes, e.g. 0x5c, the slash character, is output as \\). Sadly, a combination of font and printing limitations means that the printout is not enough to directly decode the poem: several characters are unprintable (and so are “invisible” in the printout), there is no way to reliably distinguish tabs (0x09) from spaces (0x20), and some characters have been printed incorrectly by the font (e.g. the e in the repetitive " e\\" sequences should actually be an e with a circumflex (ê), but the printout doesn’t show this). Consequently, the poem can’t be completely recovered from the printout, but I am confident that the analysis is correct.
Note that the design of this algorithm ensures that any particular (aligned) block of 3 characters will encrypt the same way, since each block of 3 characters is independently encrypted. Thus, it exhibits a number of cryptographic weaknesses, primarily exhibited as regular patterns due to repeated text in the original plaintext.
A few sample encryptions:

The encryption of three consecutive spaces is " ê\" (quotes added for clarity); since repeated spaces appear very often (e.g. before each chapter marker), this sequence can be seen repeated often.

(the last few lines of the poem) is Î£ÑÀQ$£¿Ì[ıƒ^ü…ïÓ êÊyMIÇ…~/ôì≈^Èür˙Q¯(ÀA}|yÙ¥3W+£¶ò∆©«ò\ which again matches the last few characters in the data block of the Lisp program listing.

Next, for the actual Agrippa program itself. I ran the programs in an emulator (Mini vMac), having no access to suitably old hardware myself.
The first major observation I made was that the application was compiled with a version of Macintosh Allegro Common Lisp dating back to 1989, possibly version 1.2.2 or 1.2.3. The application contains a bug which allows users to enter the Lisp REPL, a fully-featured interactive environment in which the code and data of the program can be directly manipulated. To exploit this bug, all you have to do is press some keys on the keyboard when the very first (empty) window appears. The bug is caused by a missing keyboard entry handler in that window; hitting keys on the keyboard should trigger the missing handler and result in an error. Upon any errors, the Lisp interpreter is configured to start its REPL: 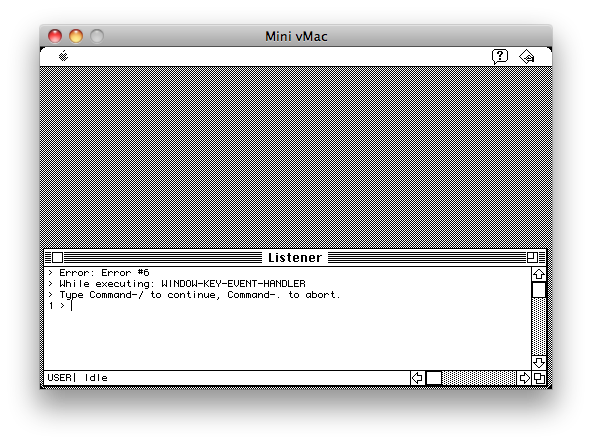 Exploiting this bug allows us to examine the program’s execution in much more detail than was previously possible. First, to get a mouse cursor, enter (_ShowCursor) at the prompt (with the parens and the underscore). Editing becomes easier after that. Typing (lisp-implementation-type) gives “Macintosh Allegro Common Lisp”, as expected. To get a list of *every* variable defined, type (apropos-list ""). This takes a long time to run – here’s what that output looks like: 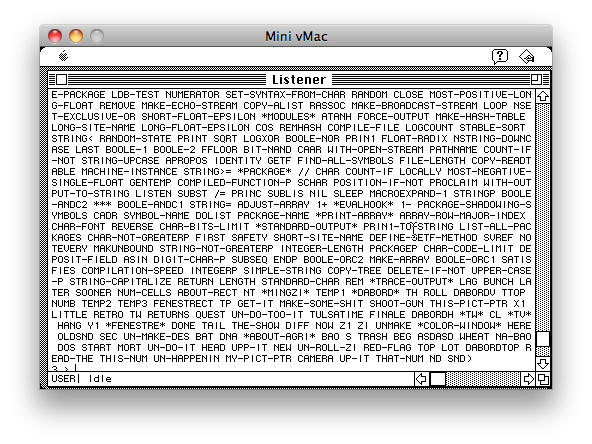 You can see some unusual names at the end, like shoot-gun, *mingzi*, *about-agri*, etc. (note that Lisp is not case-sensitive with its symbol or variable names). In fact, all variables after *TRACE-OUTPUT* are variables from the Agrippa program. Examining the Lisp code from the Agrippa Files, we see that many of the variable names are the same, but not all are. This immediately suggests that some variables were renamed, added or removed during the process of software development, implying that the Lisp listing was for an earlier pre-release version of the program.
The function UN-ROLL-ZI is suspicious, as it mirrors the name of un-roll-the-text in the original Lisp listing (in fact, “zi” means “words” in Chinese; a few variable names are named in languages other than English). However, the zi variable is not currently available. If you start the program again (from a fresh disk image, i.e. “for the first time”), and press keys when the poem window appears, typing in zi at the REPL will yield the complete, original text of the poem.
However, we are interested in establishing whether the encryption algorithm used to store zi in the Lisp program is the same as the one used in the older Lisp listing. In our original REPL, it turns out that the variable cl has the value 3, the same as the cell-length variable in the original listing. If we set cl to some other value, we can skip the decryption routine, allowing us to see the original “encrypted” data. I set cl to 10000 (larger than the poem itself), then used (continue). Agrippa dutifully begins to scroll a mountain of encrypted gibberish: 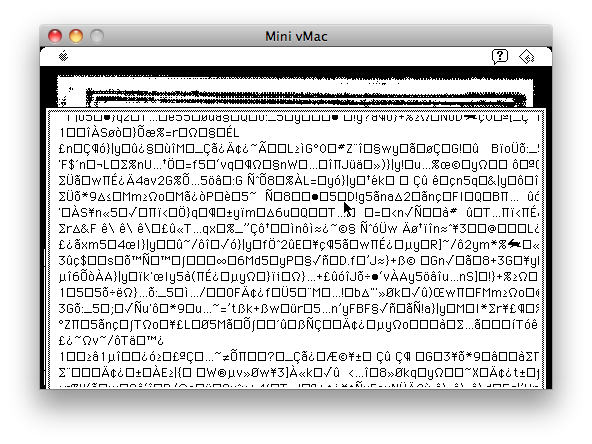 and we can see the telltale " ê\" sequence in this screenshot. I can actually confirm that the decryption algorithm used in the Agrippa binary is functionally identical to the one implemented in the Lisp listing, i.e. that part of the program did not change between that listing and the final shipped version of the program. Therefore, the major mystery of “what encryption algorithm was used” has been solved.
There are a few more things to resolve:

Finally, I wrote some code to assist me in my reverse engineering efforts. It implements all the encryption and decryption routines, and further provides a demonstration decryption of the readable parts of the final encrypted text scroll (point #2 above).

This program prints out several pages of ciphertext. You can compare the generated encrypted text with the text that is scrolled during the last 25 seconds of the emulated run of Agrippa to see that the implemented encryption routine matches the original. Note that the last line of ciphertext on each “page” is not visible due to the limited height of the text display window. Finally, the script prints out a partial decryption of the first page of ciphertext based on what is visible (boxes have been replaced with • characters, which decrypt to <).